Foothill Ranch, California — For the first time since 1976, motorcycles will return to MINT 400 in Las Vegas, Nevada with a legendary lineup of former Kawasaki Team Green™ riders Larry Roeseler, Ty Davis, and Kellon Walch competing aboard the new 2019 Kawasaki KX™450 on March 6-10 in the Pro 30+ class. 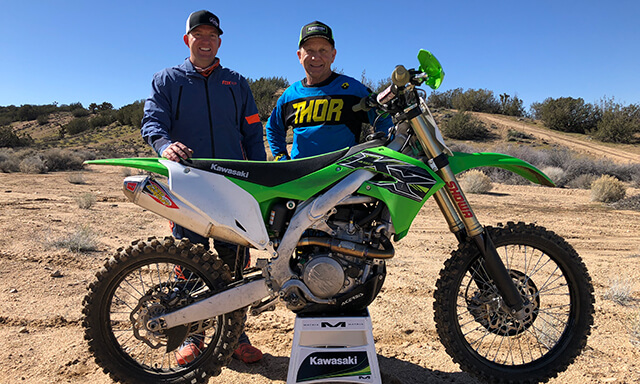 “Everyone is excited to have a legendary group of Kawasaki Team Green™ alumni reunited for the return of motorcycles at the MINT 400,” said Ryan Holliday, Team Green Manager. “The Team Green program has shared great success throughout the years with Larry, Ty, and Kellon and it shows that family always manages to find a way to get back together. We’re confident in the off-road capabilities of the new KX™450 and look forward to witnessing some of motorcycles greatest off-road racers back on the starting line of this historic race.”

The three-man team boasts a long list of motorcycle accomplishments, and arguably one of the most impressive resumes in the field, beginning with Roeseler’s 10 overall victories at the Baja 1000, 9 Baja 500 victories, and 10 International Six Days Enduro gold medals. Davis, who was inducted into the AMA Hall of Fame in 2012 and formerly Roeseler’s Kawasaki teammate, is known to be one of the most versatile off-road champions with an AMA Supercross Western Regional Championship, two-time National Enduro Champion, three-time National Hare and Hound Champion, and four-time winner of the Baja 1000. Welch, known for competing in extreme events such as the Dakar Rally, will rely on his global experience to master the challenging 80-mile singletrack course.

Motorcycles return to racing at the MINT 400 is one of the hottest topics for off-road competition in 2019. Multiple classes, consisting of both amateur and professional, will compete on a course that has been designed to challenge even the most seasoned desert riders. The motorcycle classes will take place on Saturday, March 9 and the start/finish will be behind Buffalo Bill’s Resort and Casino in the city of Primm, Nevada located at the Nevada/California state line.