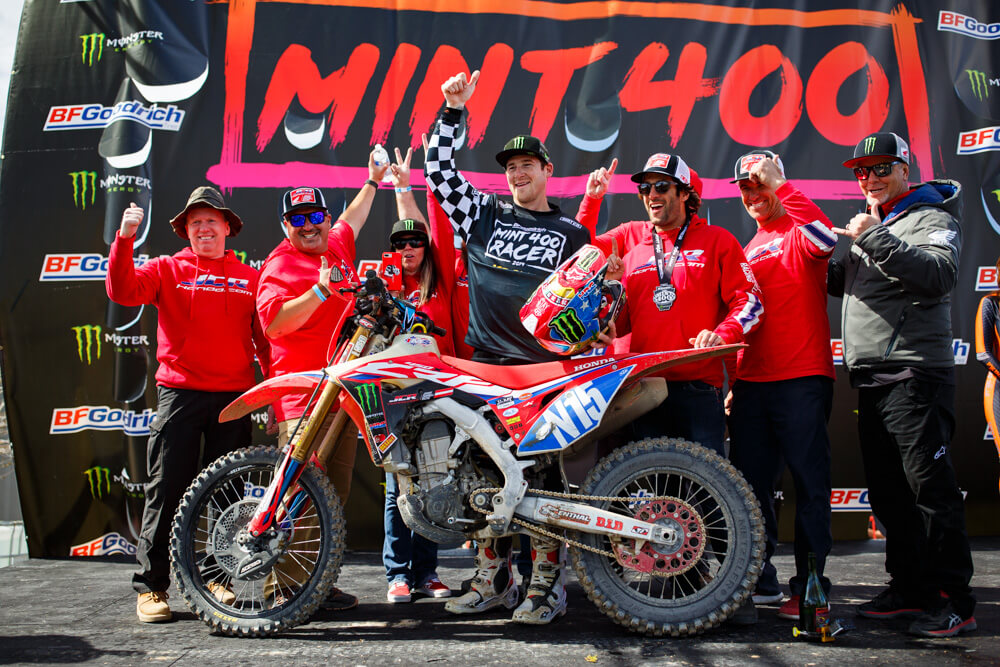 Riders Ricky Brabec and Kendall Norman led JCR Honda to the overall motorcycle victory at the 2019 BFGoodrich Tires Mint 400, the time motorcycles competed in the Great American Off-Road Race in over four decades. Brabec and Norman defeated Jacob Argubright, who completed all three laps of the 80-mile course as an ironman rider. Mark Samuels completed the podium.

“This morning, Kendall had me out there practicing the start,” Brabec said from the top of the podium. “I nailed my start, nailed it getting into gear, and stayed consistent on the first lap. After that, it got really rough out there. The course was really great, and the first lap I was out there, I thought, ‘wow, this is really fun!’ But we had some moisture this week, and I knew it was going to get really rough. And that last lap was rough. I had to push—Jake rode really well, kept us on our toes, and kept us on it all race.” 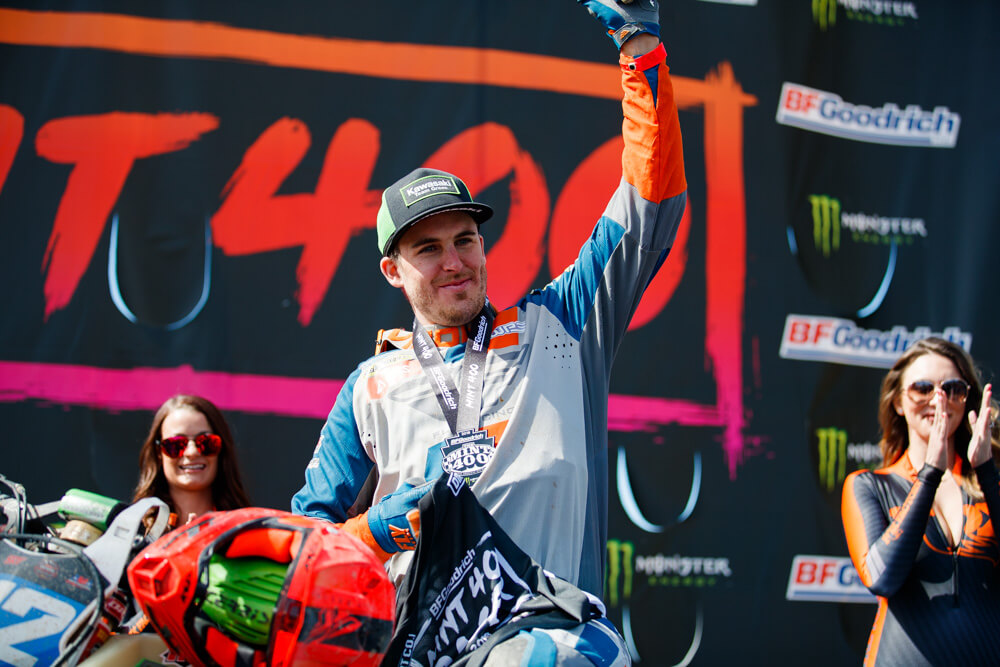 The teams led by Brabec, Argubright, and Mark Samuels were engaged in an epic battle from start to finish, with Brabec’s excellent landrush start preceding a back-and-forth contest throughout the day. Fans assembled at the start line at Primm saw Argubright make it back first at the end of the first lap, but the JCR Honda wasn’t far behind, and Samuels was still within a few minutes of the front runners. Brabec and Argubright traded the lead multiple times during the race, including on the last lap, where the 2019 Dakar Rally front-runner took the point for good.

“It was so rough the third lap,” Argubright added. “I could tell we were sprinting, but it was a fun race for sure. We were leading, but Ricky was going so fast. Towards the middle of the course we were in some washes, and he was pretty good there, but I tried to go as hard as I could.” 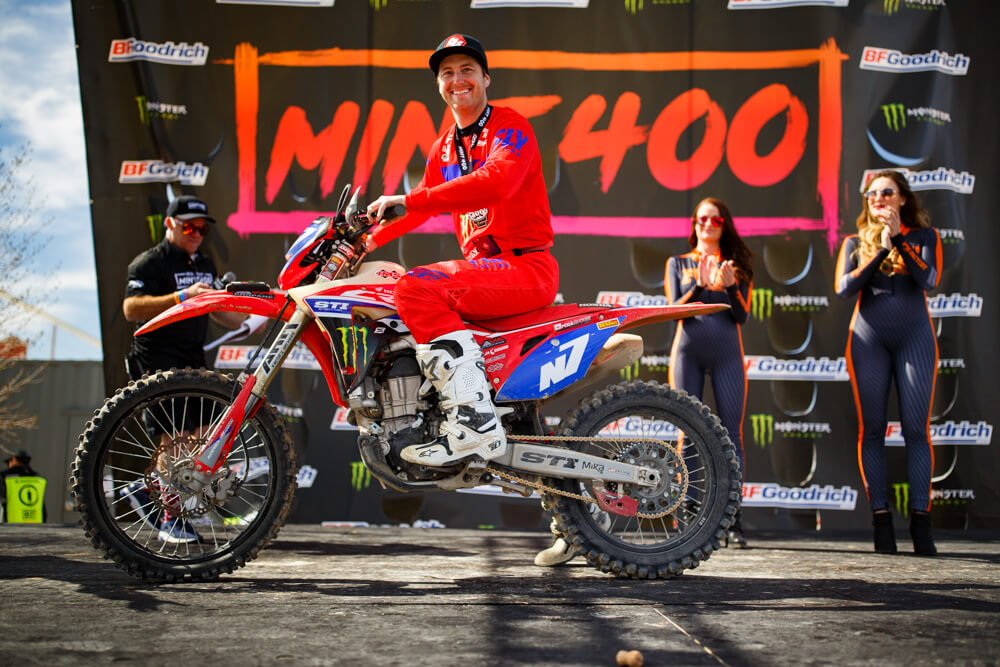 160 entries brought bikes back to the Mint in style, with classes ranging from the 450cc Open Pro class to 1200cc Harley-Davidsons. Motorcycles competed at the Mint 400 from 1968 to 1976, with Husqvarna and Yamaha splitting all of the overall wins between them. JN Roberts won the inaugural Mint 400 on a motorcycle, and returned to the event this year to serve as grand marshal and drop the flag.

“Bikes are a huge part of off-road culture, and we’re stoked to have them out here with us,” said Mint 400 CEO Matt Martelli. “It’s taken us a few years to get them back, but seeing them on the starting line this morning showed why it was all worth it.” 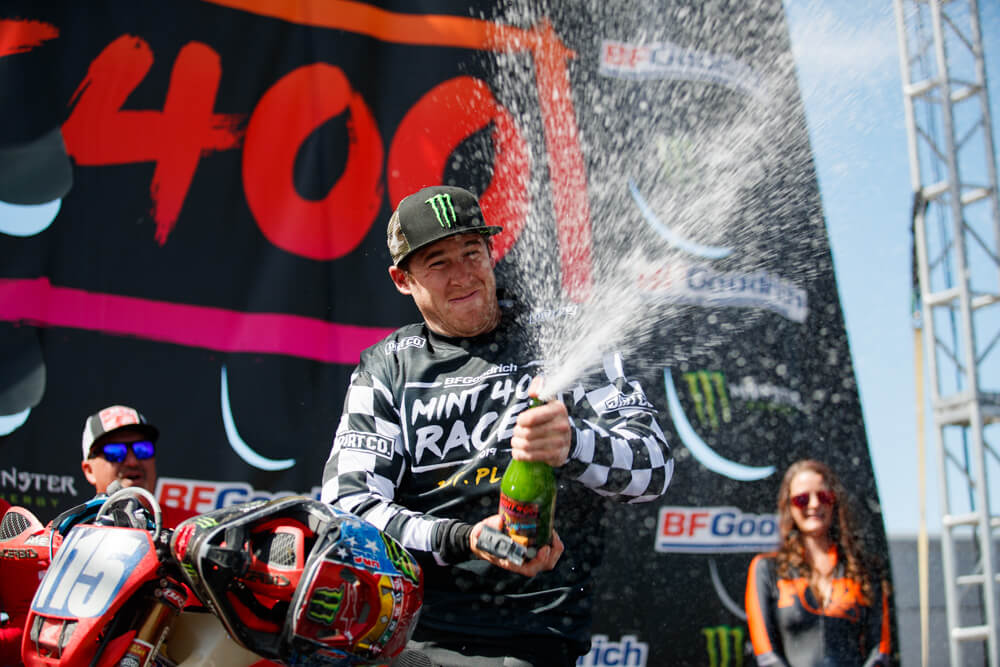 Live streaming of the 2019 BFGoodrich Tires Mint 400 continues through 4PM with the Saturday afternoon race, which will feature more than a dozen four-wheel classes including Class 4400 and UTV Unlimited racers. Sunday’s streaming coverage will kick off at 9:30AM and features the premier car, truck, and UTV entries competing throughout the day. Be sure to tune in throughout the weekend at themint400.com/live.