The Mint 400 announced today that off-road racing legend Rod Hall has been named the Grand Marshal of the 2016 Polaris RZR Mint 400 presented by BFGoodrich Tires. Hall has had a remarkably long and successful career in off-road racing and is still racing at 79 years of age. Known for being a pioneer of off-road racing, Hall’s 160+ major event wins makes him one of the most successful off-road racers of all time.

Hall went on to become a stalwart of off-road racing racing in Baja for 47 years straight, stringing 35 consecutive race wins together in the early 1980s and creating the longest unbroken streak of race victories in off-road racing history. Additionally, Hall founded The Off-Road Motorsports Hall of Fame, established to recognize individuals who have significantly contributed to off-road motorsports culture.

Rod will lead the 4th annual 4 Wheel Parts Mint 400 Vehicle Parade in his newly restored 1969 BFG Ford Bronco down world famous Las Vegas Strip to Fremont Street East, kicking off the week of Mint 400 festivities. Originally built by legendary race car builder Bill Stroppe, Hall piloted the BFG Bronco to an overall win at the 1969 Mexican 1000 (The predecessor to the Baja 1000). The BFG Bronco will be on display at the BFGoodrich Tires booth during Contingency on Friday, March 11th.

“Rod Hall is a true pioneer of our sport and culture. He personifies sportsmanship combined with passion. He is a hero of the common man and has inspired generations of off-road enthusiasts to go participate in off-road racing and recreational off-roading. The fact that he is still driven to race after all these years is truly remarkable. We are thrilled to have him back as grand marshal!” said Matt Martelli, Mint 400 CEO.

“I have lot of history with this race in particular. It’s sort of a love hate relationship but it’s a very special race to me. I love the fact that it has roared back to the way is was in the 80’s. We had a lot of fun here in Las Vegas. I still want to be behind the wheel of a race car but I am happy to share my love of off-road racing as grand marshal!” commented Hall.

As 2016 Mint 400 Grand Marshal, Rod Hall will be waving the green flag on race day for the start of “The Greatest Off Road Race in America”. Over three hundred and thirty off-road race vehicles will compete in The Mint 400 this year, making it the largest off road race in North America. The Mint 400 includes four spectacular days of festivities on historic Fremont Street in downtown Las Vegas, leading up to the epic 400-mile battle!

Eagles of Death Metal to Headline The Mint 400 Main Stage

Road to the Mint: Rafael Navarro 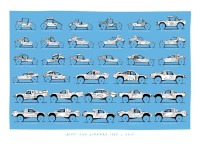 Last Call for Mint 400 Parking Passes to be Shipped in the Mail!