LAS VEGAS – For the fifth consecutive year, the world-renowned General Tire Mint 400 has selected the Golden Nugget Las Vegas as the “Official Host Hotel” for Best in the Desert’s General Tire Mint 400. The top off-road teams in the world will compete in over twenty different classes of race vehicles at this years Mint 400, which will take place the week of March 20th and continue until March 25th, 2013 in Las Vegas, Nevada.

Started in 1967, The Mint is steeped in American lore as thousands of racers in addition to celebrities from around the world have attempted to tame the brutal Nevada desert. Contingency or tech inspection takes place each year on Fremont Street in front of the casinos in historic, downtown Las Vegas. Contingency gives the fans a chance to see the race vehicles up close and personal, as well as check out a variety of off-road related products including merchandise from their favorite teams.

“We are excited to welcome back the General Tire Mint 400. We are looking forward to providing a great experience for all the drivers, teams and fans. Off-road racing was born in Las Vegas, particularly the Fremont area. We hope to continue partnership with the Mint 400 for years to come,” said Amy Chasey, Vice President of Marketing at Golden Nugget Hotel & Casino.

Winner of the AAA Four Diamond Award consecutively since 1977, the Golden Nugget Las Vegas is the most luxurious resort on the Fremont Street Experience, and consistently receives critical acclaim for exceeding customer expectations. The Golden Nugget now offers more than 2,400 deluxe guestrooms and suites; a high-energy casino featuring the most popular slot and video poker machines, table games, race and sports book, and poker room; nightly entertainment with master impressionist and comedian Gordie Brown; world-class restaurants such as Grotto Italian Ristorante and Vic & Anthony’s Steakhouse; a luxury spa and salon; and The Tank, a year-round outdoor swimming pool complete with a 200,000-gallon, live shark aquarium and the new H20 poolside lounge.

The discount code for the Golden Nugget Hotel & Casino is “GSSMINT”

The new Rush Tower deluxe guest rooms are at least 20 percent larger than our current standard Gold and Carson Tower rooms. All rooms are non-smoking and feature upgraded pillow-top mattresses, feather down comforters, 42″ plasma televisions, and contemporary decor. Many rooms will have incredible views of the Las Vegas Strip as well as wonderful views of the Spring Mountains and the Golden Nugget pool, The Tank. 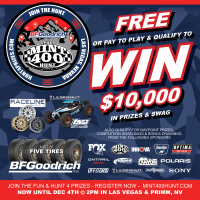