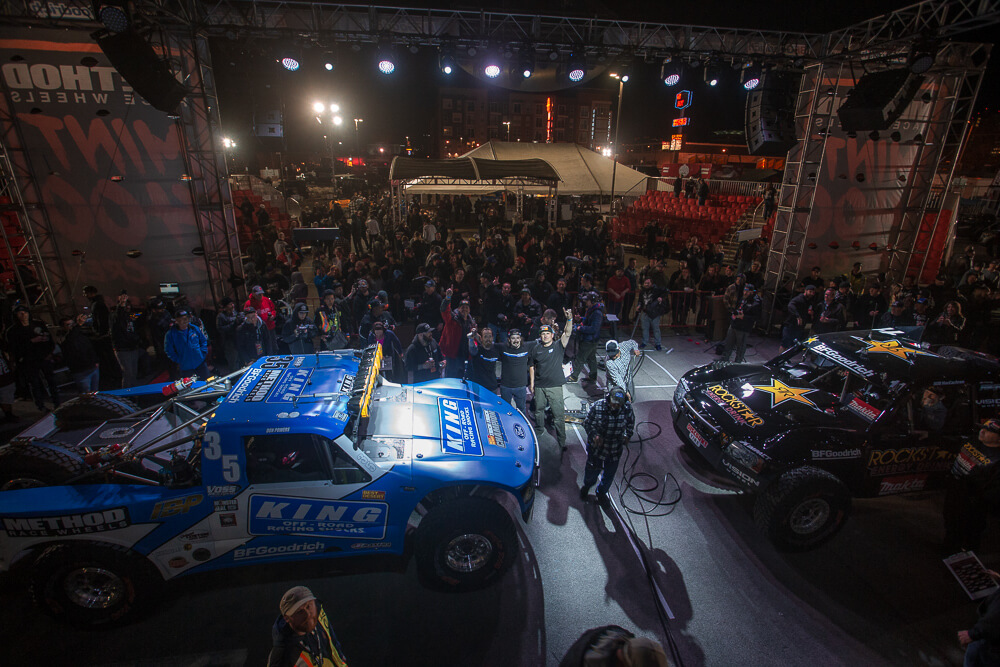 Off-road racing began its two-day takeover of Fremont Street on Thursday as this year’s Mint 400 Off-Road Festival powered by Rockford Fosgate brought together hundreds of the sport’s top drivers and biggest brands. It all ended with the Method Race Wheels Pit Crew Challenge, where results from Method Race Wheels Time Trials were announced before Voss Motorsports earned a prize package valued at nearly $20,000 with the fastest stop of the night.

The Mint 400 Off-Road Festival powered by Rockford Fosgate brings the heart of off-road racing to downtown Las Vegas. Thousands of people are attracted to the festival each day, rubbing elbows with off-road royalty, taking part in meet-and-greets and giveaways, and learning more about the products behind the sport’s biggest supporting brands. All the while, some of the most spectacular vehicles in the sport roll through the street on their way to tech and contingency, including top Unlimited Truck qualifier Bryce Menzies shortly after putting down the fastest lap at Method Race Wheels Time Trials. 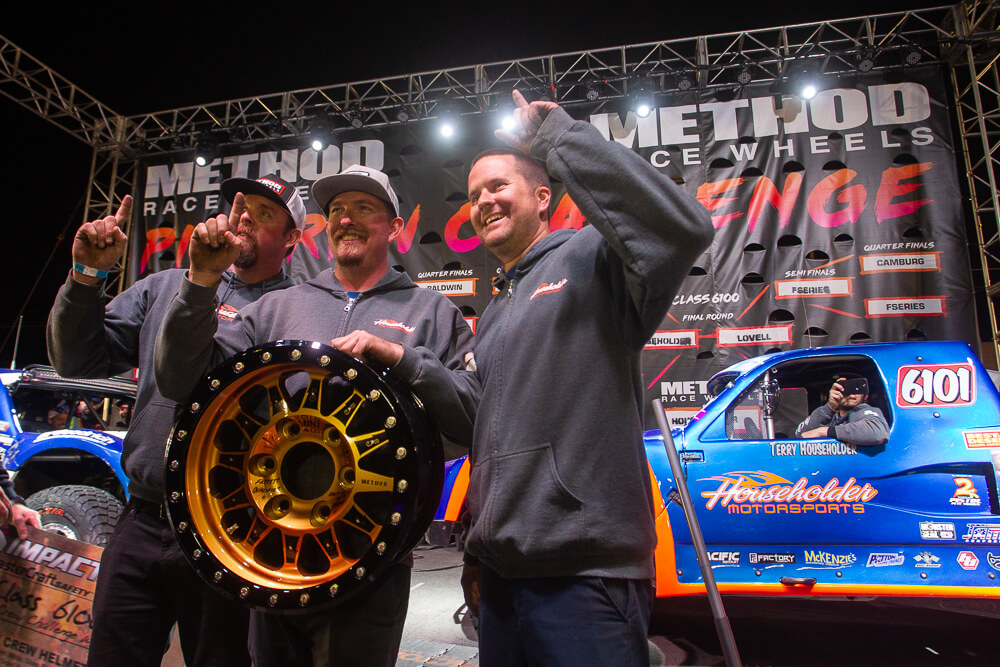 Thursday’s experience built up to the Method Race Wheels Pit Crew Challenge, where Unlimited Truck and Class 6100 teams faced off for bragging rights and one of the most impressive prize packages of its kind in off-road. Winning teams in each class would take home three sets of Method Race Wheels, BFGoodrich Tires, and Fox Shocks, plus three fueler crew helmets from Impact, two Pro Eagle jacks, $1,000 towards audio gear from Rockford Fosgate, and a custom painted trophy from Method Race Wheels.

Class 6100 kicked off the festivities, with Terry Householder and Householder Motorsports winning the event for the second year in a row. The Householder team beat Adam Ray Lunn’s squad in the quarterfinals, defeated top Mint 400 qualifier Brock Heger in the semifinals, and secured the win against Brad Lovell’s team in the final showdown, thanks in part to a loose lugnut on Lovell’s truck. From there, it was time to reveal the top qualifiers from Unlimited Truck, Class 1500, and Class 6100 from earlier in the day, where the crowd learned of Menzies and Heger’s top runs. 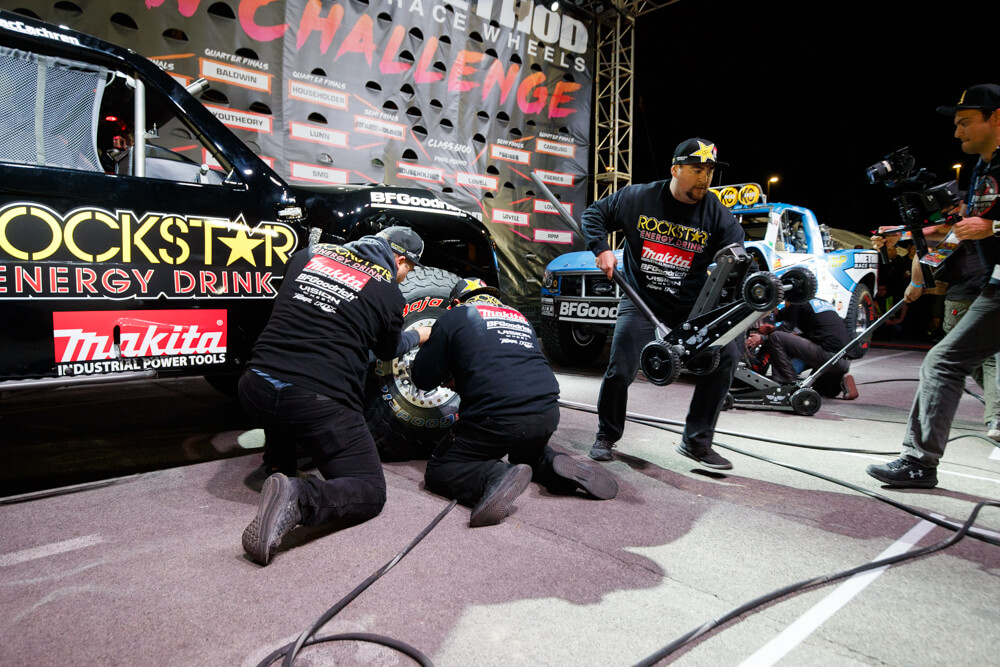 That all built up to the Unlimited Truck pit crew battles, where eight of the top teams in the class faced off. Voss Motorsports’ path to the final wasn’t easy, as they only beat the Terrible Herbst team by .06 seconds in what was by far the closest battle of the night. They improved from 58.11 seconds in the first round to 57.21 in the second, taking down Justin Lofton’s crew by over three seconds. On the other side of the bracket, Rob MacCachren’s veteran squad would advance to the finals after taking down Steve Olliges’ Team Ford in the first round and “Ballistic” BJ Baldwin in the second. 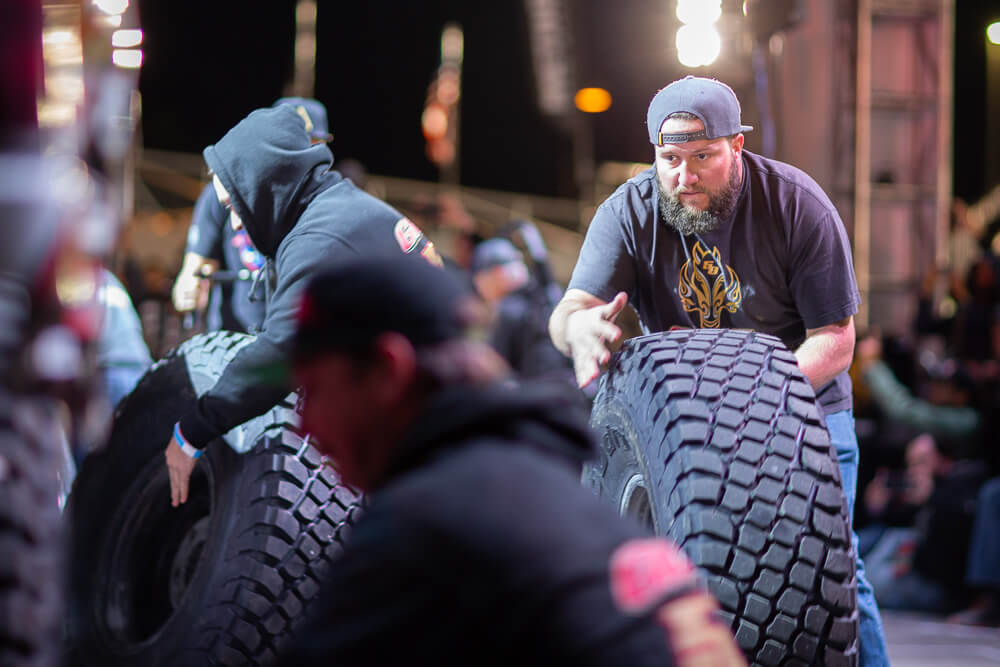 The final battle was a testament to just how skilled Unlimited Truck pit crews can be. Each team was tasked with changing two BFGoodrich Tires and returning to their pit box as quickly as possible, and the finalists put down the two fastest times of the night. While the 54.42-second time that MacCachren’s squad laid down was impressive, it was just no match for Voss Motorsports, whose 53.85-second stop was good enough to secure the win, bragging rights, and prizes.

The Mint 400 Off-Road Festival powered by Rockford Fosgate continues on Friday with more driver appearances, additional activations, and tech and contingency for the remaining entries in the field for this year’s BFGoodrich Tires Mint 400. As part of Friday’s festivities, dozens of top racers will appear at Rugged Radios Driver Meet and Greet from 11AM-4PM. From there, the event moves to Primm, where the return of motorcycle racing will kick off the action itself on Saturday morning. Live streaming will be available at TheMint400.com and on social media from 10AM-4PM on Saturday and 9:30AM-9:30PM on Sunday.